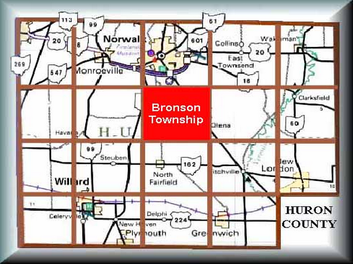 The township was named after Isaac Bronson, one of the original property owners.On 18 Feb 1817, at a meeting of the commissioners of Huron County, the townships of Bronson and Norwalk were set off from the township of Huron. On 4 Mar 1822 the County commissioners ordered that Fairfield and Bronson be organized with township privileges, and that this new creation be named Bronson. The election of township officers was held at the house of Ezra Herrick on 1 Apr 1822. In the spring of 1823, Fairfield was detached from Bronson and organized as a separate township.
Early Settlers
​The first habitation was the log cabin of the squatter John Welch, built in the summer of 1815. The first family to settle in Bronson was Benjamin Newcomb and family who came from Lebanon, Connecticut, and who moved in during the winter of 1815-1816.

​Some other early settlers, and the dates of their arrival in Bronson, were:
Some First Events
Early Population Indicators
Cemetery Locations in Bronson Township