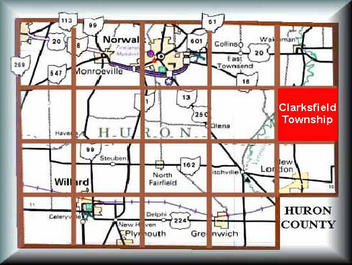 The township was named after James Clark, one of the greatest sufferers from the incursions of the British in the Revolutionary War. His loss was in the amount of 1,048 pounds, 6 shillings and 8 pence. On 2 Mar 1818, New London Township was organized by the county commissioners to comprise the townships of Ruggles, New London and Clarksfield. On 8 Mar 1820, the townships oF Clarksfield and Hartland were organized into a separate township by the name of Bethel. The first election of (Clarksfield) township officers was held in April,1822. In 1826, the two townships (Clarksfield and Hartland) were organized as independent townships under their present names.
Early Settlers
Stephen Post and family are believed likely to be the first to settle in Clarksfield, arriving in late 1816 or 1817. Samuel Husted and Ezra Wood came to Clarksfield from Danbury, Connecticut in the summer of 1817. They erected a log cabin in the township. After completion of the house, they returned to their homes in the east. While these two were preparing to return to Clarksfield, two new settlers -- Smith Starr and Simeon Hoyt -- arrived in Clarksfield with their families c.1817. It has been reported that Stephen Post and family were already located in Clarksfield when Starr and Hoyt arrived. Smith Starr was a son of Peter, son of Samuel, son of Samuel, son of Josiah, son of Thomas, son of Dr. Comfort Starr who came from England to Cambridge, Massachusetts in 1634, and later to Boston.

​Subsequent to these events, other early settlers. and their dates of arrival in the township, were:
Some First Events
Early Population Indicators
Cemetery Locations in Clarksfield Township