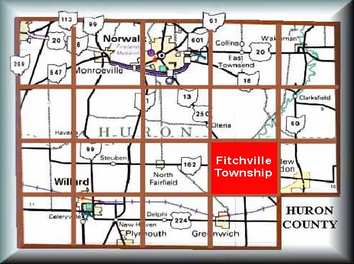 Fitchville Township is thought to have been named after a man named Fitch, who was a large land-holder in the township, and who lived in Connecticut. (The name Fitch is seen in a list of Fire Land "sufferers" and their losses.) Prior to 1820, Hartland, Fitchville, and Greenwich Townships were grouped together for civil and judicial purposes.  In 1820, Hartland was detached and connected with Clarksville. Fitchville was detached from Greenwich in 1828 and organized as a separate township. Rundel Palmer was the first justice of the peace, and Samuel Palmer, clerk.
Early Settlers
​Peter Mead, Abraham Mead, and Amos Reynolds were the first to settle in Fitchville in the summer of 1817. The Meads came from Carmel, Putnam county, New York, but were originally from Connecticut. Amos Reynolds came from Westchester county (New York?). They were forced to cut a road into the township. Immediately upon their arrival, they prepared the ground for a crop of corn, and then built log cabins to house their families who meanwhile had no shelter but that of the wagons. Abraham Mead, after clearing several acres of land, became dissatisfied with his location. Desiring to get as close to the center of the township as possible, he measured it off each way by rope and a pocket compass, and took possession of the land lying near the center. It was here that the little village of Clinton was later built.

​Some other early settlers, and their dates of arrival in Fitchville, were:
Some First Events
Early Population Indicators
Cemetery Locations in Fitchville Township