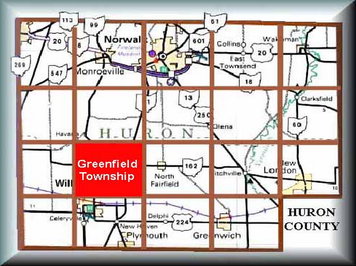 The first election for township officers was held at the house of Erastus Smith in the spring of 1816. Joseph Cook was elected township clerk; Eli Halladay, Bildad Adams and Nathan Warner, trustees; William McKelvey, constable; and Erastus Smith, justice of the peace. At that time Greenfield was attached to the townships of New Haven, Peru, Norwich, and Fairfield, This situation continued until each of the named townships acquired a sufficient number of voters to organize an independent township, at which time the township would be detached from the others. In 1819, the name of the township was changed to Berlin, and that name continued until 1822, when the name of Greenfield was restored. The change to Berlin was made because there was another Greenfield Township in Highland County, Ohio, with a post office of the same name. After the name of Greenfield was restored, the post office was called Lafayette until 1835, when it was changed to Steuben.
Early Settlers
​The first to arrive in Greenfield for the purpose of settlement was William McKelvey, Jr. who arrived from Trumbull County, Ohio, in 1810. He purchased 106 acres of land from Caleb Palmer of New Haven, and in 1811 he cleared 11 1/2 acres and sowed it to wheat. After hearing the news of Hull's surrender in August, 1812, he returned to Trumbull County, where his family still lived, and joined the army as a volunteer for six months. In the spring of 1814 he returned to Greenfield with his brother -in-law Truman Gilbert and his family. The first family to permanently settle in Greenfield was that of Hanson Read who came in 1811 with his wife, and in company with Abram Powers (his wife's father); Jacob Rush (his hired hand); James Wilson (who later became a settler in Greenfield ); Caleb Palmer (who settled in New Haven); and John Laylin (who settled in Eldridge, later Berlin).
​
Some other early settlers, and the dates of their arrival in Greenfield, were:
Some First Events
Early Population Indicators
Cemetery Locations in Greenfield Township