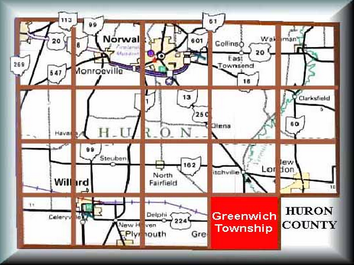 Greenwich Township derives its name from Greenwich, Fairfield County, Connecticut, where most of the original owners of the land resided. In 1815, Greenwich was attached to, or within the jurisdiction of, New Haven Township for civil purposes. In 1819, Greenwich, Fitchville, and Hartland were united, and an election was held that same year at the house of Thomas B. White for the purpose of choosing officers of the combined townships. Hartland was detached in 1820 and, in 1823, Greenwich was separated from Fitchville and organized as a separate township. The following were elected officers of the new, independent township of Greenwich: Jeremiah Rusco, Henry Washburne, trustees; David W . Briggs, clerk; Varney Pearce, justice of the peace; and Ephraim F. Barker, constable.
Early Settlers
​The first settler in Greenwich was Henry Carpenter who came from Ulster county, New York in 1817. He died in the fall of 1818 from over exertion at a barn raising. His widow married Abraham Mead, of Fitchville, and she died in 1825.

​Some other early settlers, and the years of their arrival in Greenwich, were:
Some First Events
Early Population Indicators
Cemetery Locations in Greenwich Township