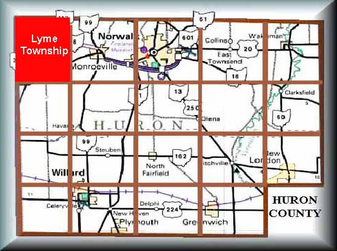 Prior to 1816, the township was attached to Ridgefield Township for election purposes. It was created and named Lyme Township by the County Commissioners on 19 Sep 1819. The name of Lyme was proposed by Major Joseph Strong who owned a large tract of land in the township, and who was impressed with the beauty of Lyme, Connecticut. Previously, the township was named Wheatsborough in honor of a Mr. Wheat who was a major landowner in the area.
Early Settlers
​Among the early pioneers, up to about 1820, were the following named, who arrived in the township in the year stated. The first settler was Conrad Hawks who came to the township in 1808.
Some First Events
Early Population Indicators
Cemetery Locations in Lyme Township