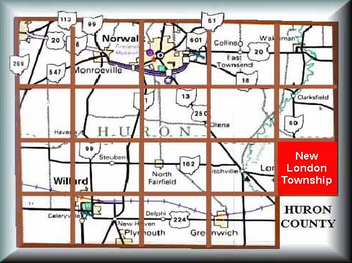 The name New London originates with Nathan Douglas, Nathaniel Richards and Nathaniel Ledyard who were principal "sufferers" and landowners, and who resided in New London, Connecticut. The name remained unchanged from the time of the first settlement. The township of New London was organized in 1817, and the first election was held at the house of William Sweet on the first Monday in April, 1817. William Sweet, Isaac P. Case and Solomon Hubbard were elected trustees; Sherman Smith, township clerk; Hosea Townsend and B. Crampton, appraisers; Philo T. Porter, constable; H. Townsend, lister; and Isaac P. Case, justice of the peace.
Early Settlers
​Abner Green; his wife, Mrs. Van Deusen, a widow; and his wife's three daughters were the first to settle in New London in February, 1815. Here, Green erected the first log house, using basswood bark as covering and roofing. Abner Green cleared two to three acres of ground in 1815 and raised the first crop of corn in the township. Green, a Methodist, often held religious meetings and was reported to be a good preacher.

Some other early settlers include the following named, along with their dates of arrival in New London:
Some First Events
Early Population Indicators
Cemetery Locations in New London Township