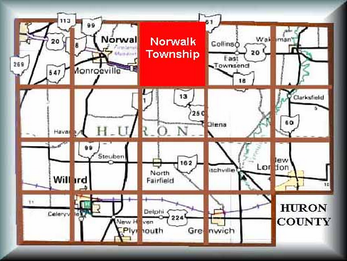 On 9 Nov 1808, a board of directors of the proprietors of the half million acres called the "Sufferers' Land" passed a resolution to name all the townships therein. All members of the board were from Connecticut. In that resolution, township number 4 in range 22 was named Norwalk, probably through the sponsorship of Taylor Sherman who was the only member of the board from Norwalk, Connecticut. He was the father of Gen. W. T. Sherman of Civil War fame. In early 1817, Norwalk was part of the extensive township of Huron. In February, 1817, the townships of Bronson and Norwalk were separated from Huron Township, and combined under the name of Norwalk. On 8 Mar 1820, the townships of Ripley and Fairfield were annexed to that then known as Norwalk. On 4 May 1822, Ripley, Fairfield and Bronson were set off from Norwalk, leaving Norwalk as an independent township. Norwalk Township was incorporated by act of legislature 11 Feb 1828.
Early Settlers
​Early in 1809, Nathan Comstock, with hired men Darius Ferris and Elijah Hoyt, traveled from Connecticut to Norwalk Township where they erected the first pioneer house of record and cleared about 10 acres of land which they sowed to wheat. After the wheat had been sown, the three returned to Connecticut. In 1810, Abijah Comstock, by arrangement with his father and his brother Nathan, took up Nathan's interest in Norwalk and traveled there to reside in the house built by Nathan, and to harvest the crop of wheat sown in 1809.

​Other early settlers, and the dates of their arrival in Norwalk, were:
Some First Events
Early Population Indicators
Cemetery Locations in Norwalk Township