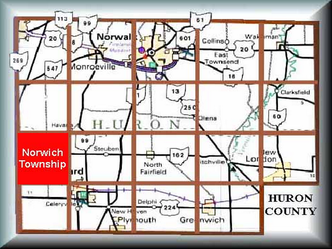 On 9 Nov 1808, Norwich Township was named for its Connecticut namesake. As early as 1815, Daniel L. Coit had become, by heirship and purchase, the owner of the township of Norwich, except for a part of the first section. In 1815, Coit sold sections 2 and 3 to Judge Canfield of Connecticut, who soon after sold the same to James Williams, Phillip R. Hopkins, and David W. Hinman. In the spring of 1816, these three surveyed the two sections into one hundred acre lots. They also laid out a village named Barbadoes. Norwich was attached to Greenfield Township in 1818. In 1819, Naum Gilson was elected supervisor for the township. Then, in 1820, the township of Sherman was organized with Norwich attached. In 1820, Russell Woodruff of Norwich was elected justice of the peace. In 1827, Norwich was detached from Sherman and organized as a separate township.
Early Settlers
​On 10 Feb 1817 Chauncey Woodruff and Wilder Lawrence arrived in Norwich with their families. There they stayed at a rudely-constructed, previously built "village house" until they had cleared and planted a field of corn and erected for themselves log houses.
​
Subsequently, other settlers arrived in Norwich. They, and their dates of arrival, were:
Some First Events
Early Population Indicators
Cemetery Locations in Norwich Township