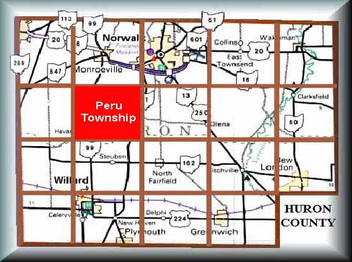 The township was originally called "Vredenburg" after William J. Vredenburg who had bought up claims of the Fire Lands "Sufferers" until he owned three-fourths of the township; specifically sections 2, 3 and 4. The township was annexed to Greenfield and continued under the name of Vredenburg until 3 Apr 1820 when, at a meeting held at the house of Joseph Ruggles, the name of Peru was substituted, and the first election of township officers for the now independent township of Peru was held.
Early Settlers
​The first white settlers were Elihu Clary, Henry Adams and William Smith who arrived in the township 15 Jun 1815.
​
Other early settlers, and their dates of arrival, were:
Some First Events
Early Population Indicators
Cemetery Locations in Peru Township