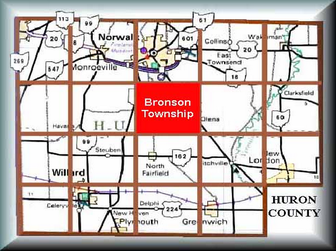 The township was named after Rev. Hezekiah Ripley of Connecticut, who was one of the Firelands "Sufferers," and who owned land in the third section. The township was organized as soon as there was a sufficient number of voters. On 2 Apr 1827 the first township election was held. The first justice of the peace, Simeon Howard, was elected 4 Aug 1827. But since he did not serve in office, another election was held on 12 Nov 1827 and Benjamin B. Holiday was elected to take his place.
Early Settlers
​The earliest settlement was in the southwest part of Ripley Township in 1820. It was there that a Seth Foster, a Mr. Decker, and a Mr Jaralman and son lived during that year. Foster and Decker, who were from New York State, returned there after a short residence in Ripley; Jaralman died and his son moved away. The first permanent settlement was made by the families of Moses Inscho, D. Broomback, and James Dickson in 1825 and 1826.

​Other early settlers, and their dates of arrival in Ripley, included:
Some First Events
Early Population Indicators
Cemetery Locations in Ripley Township