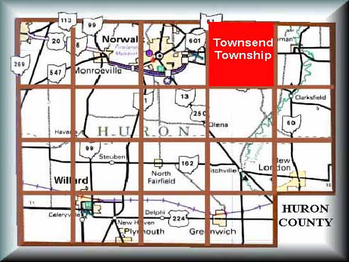 Townsend Township was named after Kneeland Townsend who owned the greatest part of the land in the settlement. Prior to coming to Ohio he was a merchant in New Haven, Connecticut. The first election of township officers was held 15 October 1820 at the house of Benjamin Bailey. On 15 November 1820, Jasper Miles was elected Justice of the Peace. The first election for State and County offices was held 9 October 1821. The different settlements were so separated that election days were the only occasions when settlers could get together. Men and boys attended the elections as a holiday, bringing their rifles with them to shoot at targets.
Early Settlers
​George Miller is generally acknowledged as being the first settler. He came originally from Pennsylvania and arrived in Townsend in 1811.

​Other early settlers, up to about 1820, and their dates of arrival in Townsend are:
Some First Events
Early Population Indicators
Cemetery Locations in Townsend Township