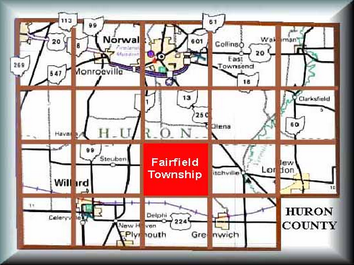 Fairfield Township was named after Fairfield, Connecticut. It was detached from Bronson, and organized in 1823, the election being held at a school house in the third section. There were 22 voters taking part in the election of officers. Ransom B. Ellsworth was elected justice of the peace; Philip Moffitt, Spencer Baker, and Ransom B. Ellsworth, trustees; Eleazer Jones, clerk; and Spencer Baker, constable.
Early Settlers
​The first clearing in the township was made by a widow of foreign birth named Mrs. Sample. She and her nine children came from Newark, Licking County, Ohio, in 1816 and settled on lot 36 in the second section. The family was very poor. Mrs. Sample was a remarkable woman. She is reported as out-reaping a man in the grain field in 1817, and she clothed her family in cloth which she wove from the silk of wild nettles. Mrs. Sample married Jacob Rush who died soon after. Her daughter Martha married Amos Harkness. Mrs. Sample later moved to the west and lived to be nearly 100 years old.

​After the initial settlement of the Sample family, other early settlers who came into the township, with their dates of arrival, were:
Some First Events
Early Population Indicators
Cemetery Locations in Fairfield Township

The numbers of the cemeteries below, correspond
​with the circled numbers on the map above.
​
Information compiled by Ken Shute.
Maps by Bob Kerner.
Transcribed from the old Huron County OHGenWeb site
© 2005-2014
​All Rights Reserved.