The Charles Phillip and
Philomena (Eberling) Hasselbach Family
​​Ancestor Story Submitted by Dan Bert Major
First Families of Huron County Member #360
Charles Phillip Hasselbach KL78-J85
(26 August 1838-12 July 1922)
and
Philomena “Bena” Eberling KL78-JM6
(5 December 1836-20 February 1926)
​As I mentioned in my Miller Family History narrative, Philomena was a discovery made while tracing the history of Friedrich Eberling, my great-great grandfather. One always wonders why immigrant ancestors settle where they did. Though I did not know why Friedrich and his family specifically came to Huron County, Ohio, I had hoped to find a connection somewhere along my research path.

Friedrich died in Bellevue, Huron County, Ohio on 25 March 1925 and in his obituary in the Bellevue Gazette newspaper on 27 March 1925 it listed as a survivor one sister, “Mrs. Hasselbach, east of town.” So the journey began. I discovered her name was Philomena and upon finding her obituary in the Bellevue Gazette on 22 February 1926 the story unfolded.

Almost three years older than Friedrich, she was born in Burgschwalbach, Province of Dietz, Nassua, Germany on 5 December 1836. Little is known of her early life but an account posting to the familysearch.com site (KL78-JM6) shares details of her immigration to the U.S. She had been betrothed to Charles P. Hasselbach (KL78-J85), born in Berndroth, Germany on 26 August 1838. This account has her departing with Charles and her future in-laws from Bremen, Germany and arriving in New York, New York 14 January 1865 aboard the ship Geestemunde with 111 other passengers, and then by train travel to Bellevue, Ohio. (There were a total of eight Hasselbach family members on this ship log and her named is listed as Catharina Ebeling)

A detailed account of Philomena’s trip from Germany to America is posted at familysearch.com. It states the Hasselbachs departure from Berndroth,

Germany was by wagon to Nassau on the Lahn River. Philomena left her home on the Aar River where it empties into the Lahn River, and went to Nassua and joined the Hasselbach Family for the journey to America. From there by train to Coblenz on the Rhine River and by boat to Koein, and then by train to Bremen Harbor. This took a week and passage to New York was another 58 days. The account also mentions that upon her arrival in Ohio she went to work for her future sister-in-law, Catherine Hasselbach Schild, at Schild’s Store and Tavern in Hessville, Ohio for a time.
Charles and “Bena,” as she was fondly called, were soon married. In researching church records at St. John’s Lutheran Church in Bellevue, Ohio it is recorded in the oldest book of church records, (all in German) on page 100, line number 2, the marriage of Charles and Philomena was recorded as 28 May 1865. I have obtained a copy of the marriage license, which was issued in Erie County, Ohio.

On the U.S. Census of 1900 the family was living on a farm east of Bellevue, Ohio, in Lyme Township, Huron County, Ohio. The 1910 census shows the same with sons, William and Carl, both single, living in the same household.

I now wonder if Friedrich Eberling and his family may have stayed with this family for a time after they immigrated in 1884, since I have found no evidence that Friedrich ever rented or owned any land in Huron County prior to 1920.

Charles died in Bellevue, Ohio on 12 July 1922 and was buried in Bellevue Cemetery. (FAG ID#173129815) Philomena continued living on the family homestead with her sons William and Carl until her death on 20 February 1926. Bena (FAG ID#173129807) was buried next to Charles in the Bellevue Cemetery Lyme Township, Bellevue, Huron, Ohio, Section 10, Row 31 (8 & 10). Church burial records confirm Philomena’s funeral services (page 286) were held at the family home in Lyme Township through St. John’s Lutheran Church with Reverend A. A. Ahn oﬃciating. Her obituary is quite detailed and can be accessed online. She was 89 years of age and died on 20 February 1926. Her parents are listed as Fred Eberling and Catherine Reitz.
Their Children
William Hasselbach (KL7D-9Z2) was born on 13 April 1866 in Huron County, Ohio. He never married and lived with his parents throughout their lives. After their deaths he lived with his brother Carl and his family. He died in Huron County, Ohio on 26 May 1953 and was buried in the Hasselbach Family plot in Bellevue Cemetery. (FAG ID#1731562020)

It is important to note that as of this date no one with the last name of Hasselbach lives in Bellevue, Ohio. However, there are extended family members related to this clan still in the area. 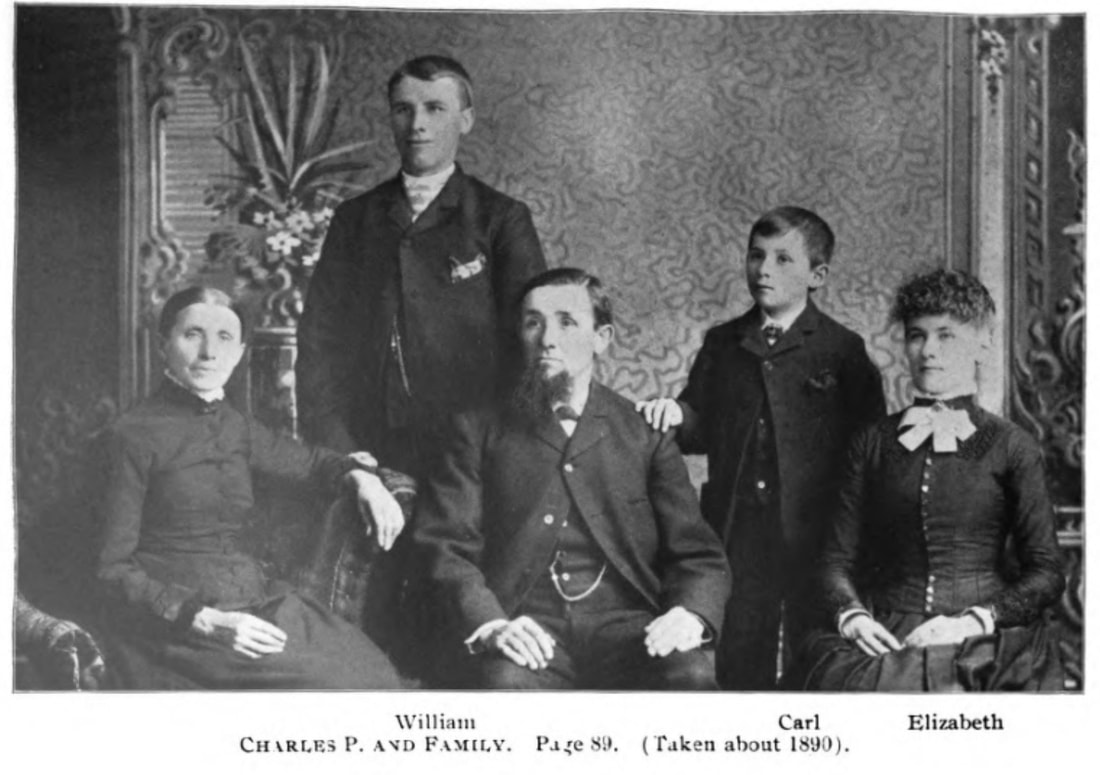