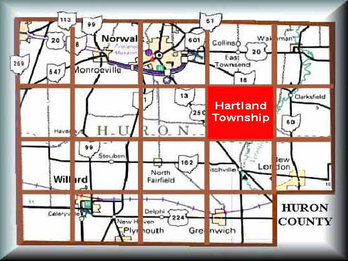 The original name of the township was Canterbury. It was annexed to Clarksfield (formerly Bethel) until April 1826, when it was detached and organized as an independent township under the name of Hartland. The election of township officers followed, and by 5 Mar 1827 the first settlement of the trustees with township officers was made.
Early Settlers
​The first settlement was made on "Hartland Ridge" in the spring of 1817 when William and Alva Munsell arrived to build a cabin and plant a piece of land to corn.
​
Other early settlers, and their dates of arrival in Hartland, were:
Some First Events
Early Population Indicators
​
Cemetery Locations in Hartland Township