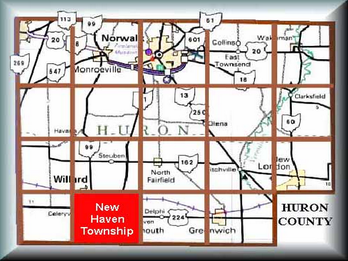 New Haven Township was so named since nearly all the early settlers were from New Haven, Connecticut, and one of the principal landowners, who inherited or purchased a large portion of the land in the township from the original grantees, also lived in New Haven, Connecticut. The first election in New Haven Township was held 17 Aug 1815. The following officers were elected: Samuel B. Carpenter - clerk; Robert Inscho, John Barney, Martin M. Kellogg - trustees; James McIntyre, Chisim May - overseers of the poor; Samuel Knapp, Reuben Skinner - fence viewers; Stephen D. Palmer, Henry Barney - supervisors; Calvin Hutchinson, Samuel Knapp - appraisers; Calvin Hutchinson - constable; and Caleb Palmer - treasurer. Caleb Palmer, later in the election of 24 Nov 1815, was elected justice of the peace.
Early Settlers
​New Haven was the first township settled within the territory of Huron County. Caleb Palmer was the first pioneer to settle in New Haven in 1811, before the war of 1812. He was a surveyor, and as such, had traveled the forests in this area some years before. He bought land in the township in 1810, and settled there with his wife and two children in 1811. Two men, Woodcock and Newcomb, came about the same time, but neither remained long in the township. John Chapman, also known as "Johnny Appleseed," lived for a time with Caleb Palmer and his family, beginning in 1811, and lived there for much of the time during the war of 1812, except for times of pilgrimage to other parts of the country. The settlement increased rapidly beginning in 1814.

​Among those early pioneers were the following, with date of arrival shown for each:
Some First Events
Early Population Indicators
Cemetery Locations in New Haven Township