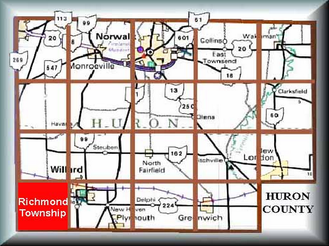 The original name for Richmond was Cannon, given in honor of Samuel Cannon, a wealthy merchant of Norwalk, Connecticut who was one of the Fire Lands "sufferers."  From 1815 to 1836, Richmond was attached to New Haven. In March 1836 the householders of the township met at the house of Philip Upp to prepare a petition to send to the commissioners of Huron County, requesting an organization of the township under the name of Richmond. At the April election of 1836, Amos Ogden was elected a supervisor for Richmond Township. The petition to organize as Richmond was granted by the County commissioners, and the election for township officers was held 4 Jul 1836.
Early Settlers
​William Tindall bought the first land for settlement in 1825. That same year, Tindall cleared the land, built a cabin, and set out an orchard, the first in Richmond. Eventually, Tindall traded his land to Judge Ives, of New Haven, and left the township. The first permanent settler was Amos Ogden, who came in 1833, and died in 1850, leaving no children.

​Other early settlers, and their dates of arrival in Richmond, were:
Some First Events
Early Population Indicators
Cemetery Locations in Richmond Township