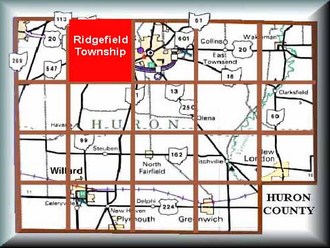 Ridgefield Township was organized the first Monday in December 1815 and comprised the territory now included in the townships of Ridgefield, Sherman, Lyme and the south half of Oxford. On 4 March 1816, the second and third sections of Lyme were set off to Wheatland [Wheatsborough?]. On 2 March 1818 Oxford was attached to Bloomingville. On 6 February 1820 a one-mile square on the southwest corner of Oxford was attached to Lyme, and the next square mile east was attached to Ridgefield. Lyme and Sherman were detached from Ridgefield in 1819.
Early Settlers
​William Frink is thought to be the first white man who contracted for land in Ridgefield Township for the purpose of settlement. His contract is dated 1811 and was for the south part of lot number five in the fourth section.

​Other early settlers, and the year of their arrival in Ridgefield, up to about 1820, included:
Some First Events
Early Population Indicators
Cemetery Locations in Ridgefield Township