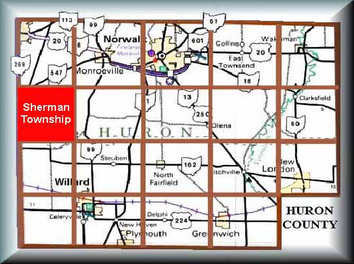 Sherman Township was named in honor of Taylor Sherman, Esq., one of the directors of the Fire Lands Company, and originally a large landholder in the township. The name was given at a meeting of the directors, held at New Haven, Connecticut on 9 Nov 1808.

At the first meeting of the commissioners of Huron County, held 1 Aug 1815, Sherman was attached to Greenfield Township. In Dec. 1815, it was detached, and together with the south half of Oxford Township, was united with Ridgefield Township. About 1820 it was united with Norwich Township, but no record is given of it. On 6 Mar 1827, Norwich was detached, and Sherman thereafter remained a distinct township. The first election, on record, after the separation from Norwich was held 6 Apr 1829 to elect Sherman Township officials.
Early Settlers
​Daniel Sherman (son of Taylor Sherman and uncle of General W. T. Sherman), Burwell Fitch, and Samuel Seymore were the first white settlers of the township. They arrived in Sherman in 1812, and came from Norwalk, Connecticut.

​Included among the other early settlers, and their dates of arrival in Sherman, were:
Some First Events
Early Population Indicators
Cemetery Locations in Sherman Township