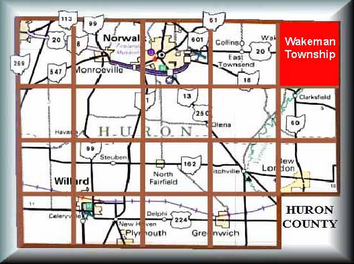 Wakeman Township was named after Jessup Wakeman. He was one of the original 74 grantees of land in Wakeman Township, pursuant to the enactment in 1792 by the State of Connecticut, granting land on the west end of the Western Reserve to Connecticut property owners whose property had been destroyed by fire during the Revolutionary War. Wakeman Township was attached to Florence Township (Erie County) until Feb., 1824, at which time it was organized as an independent township by the county commissioners. In April, 1824, elections were held in a log school house near that of Augustin Canfield for township officers.
Early Settlers
​The first family to settle in Wakeman was that of Augustin Canfield in May, 1817. He came from New Milford, Litchfield County, Connecticut with his wife and four children, his brother Burton Canfield, Seymour Johnson, and his hired man.

​Some other early settlers, and their dates of arrival in Wakeman, were:
Some First Events
Early Population Indicators
Cemetery Locations in Wakeman Township